Click on your favorite community inside the map of southeast Calgary, to see all the latest listings which are updated every hour 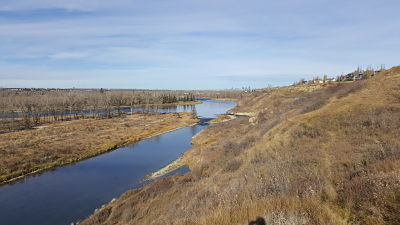 The view from Fish Creek Park in Southeast Calgary

Southeast Calgary is a mixture of industrial, affordable residential and higher end homes.

Foothills industrial park is one of the largest employment centers in the southeast and Quarry park is growing rapidly with companies like Imperial Oil moving their head office and all it’s employees there. The new South Calgary Hospital which recently opened in Seton has also created hundreds of good paying jobs which really boosts the appeal of the area.

More affordable housing can be found in communities like Ogden and Lynnwood, while higher end homes can be found in most communities throughout the southeast. Neighbourhoods like Mckenzie lake and Auburn Bay boast their own man made lakes for their residents exclusive use, and other communities such as Douglasdale and Cranston offer estate homes backing on to the Bow river high up on a hill with tremendous views of the city and mountains.

Although there is no C-Train service and probably won’t be for several years, there are BRT or Bus Rapid Tranist routes set up to take residents of the southeast where ever they need to go in a reasonable amount of time.  The area is also well served by Deerfoot trail and Stoney Trail which is the new ring road.

There is no shortage of shopping and amenities with each community being well served with strip malls and big box stores. The closest mall would be Southcentre which is just minutes away from any part of the southeast.

Search for homes on your phone

Find All Listings on a
Map-Based Search